Some DX in September:

Not very much of DXing to report during September. Still waiting to put my Far East BOG onto the ground. However I tested it a few days in Sept. with good Far East conditions (14-17): mainly Chinese, but some other interesting DX-catches also. I noted Mainichi Hoso JOFR 1278 with sign off for a Silent Period on Sunday night 18 utc - at the same time the programme was heard // on 1197 - that channel is pretty hard to get in Southern Finland. The station has call-ID just at 18.00 utc with all relay stations mentioned (JOFE & JOFO). A new station for me. Also some other interesting channels of Japanese (like 1233, 1368 NHK, 1422 were heard.
As far as TA´s is concerned, quite a few NA & LA-signals were noted during September. Only one more intresting for me was a Columbian HJJH Radio Ciudad Milagro Armenía on 1460 kHz. Usually it is Nuevo Continente here dominating, but on Sept 30 that was not the case. Call-ID at s/off 0403 utc, this one seems to be a bit lower than N.C. (on 1459.992). Thanks for checking my recording JEÖ & JPR!

New model of KWZ this / next year ?

I made a trip to Germany in September and I visited the factory of Kneisner&Doering briefly at Braunschweig. It was a nice discussion with Mr. Kneisner who unveiled a bit of the new model of KWZ-receiver: indeed we can wait for a true 32-bit DSP rx with some interesting features like even better dynamics than the old one + spectrum display etc. So I am really looking forward in seeing a real DX-receiver after many years of decline of producing of the good receivers for DXers also. At the picture you can see a part of the new set - the test of the control software was going on. We talked also about their model of SDR-receiver which we hope to test by the PUDXK-team later on. The SDR is based on SDR-1000 model using the same software. 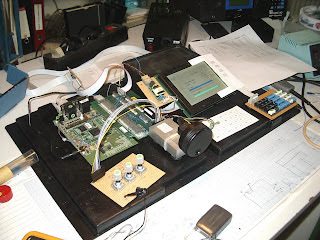