WCNS played nice oldie tunes when I picked it up during PAX63 last autumn on October 10. At the same time many fine US east coast -stations were audible, WDSK-1410, WCED-1420 and WWPR-1490 for instance. WCNS identified with a jingle: "The Greatest Hits of All Time - 1480 WCNS." WCNS Program Director verified with a short e-mail in 12 hours.
Posted by TuA at 15:25 No comments:

La Que Buena WLAA is a quite common guest in Scandinavia all MW -season long. Getting a verification has been a bit harder job but every now and then the station verifies. This time I received a kind e-mail and a fine mp3 -studio audio including the station ID and some promotional announcements. WLAA is located in the city of Ocoee, one of the surrounding cities west of Orlando FL.
Posted by TuA at 15:15 No comments:

Capturing WDSK from Cleveland, Mississippi on 1410 kHz was one of the highligts on PAX63 for me. As the matter of fact this station is my second catch from Mississippi and my first Mississippi -station from the traditional US regional cahnnels. October 10, 2006 was a great day for DXing with many fine stations from the US east coast and the southern states.
WDSK verified by a short but a polite e-mail after I found a correct e-mail address to the station.

"I have listened to the audios and you are correct it is the WDSK 1410am station you heard. It is amazing what radio waves can do... I thank you for letting me know about this. Feel free to email me if you ever have any questions and I will try to answer them as best I can."
Posted by TuA at 12:47 No comments:

I heard this station's ID in January 2005 during PAX48. KTSN faded in for a moment with a clear identification but the audio was mixed up with other stations (mainly with CFYK) and KTSN faded away soon . However, the announcement was so loud and clear that the General Manager recognized her station easily from the audio clip I sent her some days ago. Thanks to BH again for the v/s information.
Posted by TuA at 12:36 No comments: 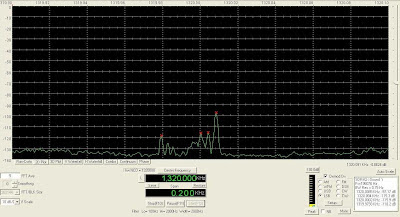 Tests at sunrise
I did some more tests with sdr-iq vs sdr-14 vs Icom-9000. One thing was a simultaneous listening "by ear" when some NA stations were disapperaing about an hour after the local sunrise on March 22. As you can see on the picture the stations (CKEC on its split 1320.008 and other) are very weak at about -100 dBm (SpectraVue s scale). That means you can hear some muisc or talks but can not understand speaking. I compared the three receivers using same antennas, either a KAZ (at 340 degr.), 10x40 meters or a longwire of 150 meters (at 340 degrees). A preamp. of 10 dB was used and there was no problem now when the RF levels were low (I tried both sdrs at 0 dB RF or -10 dB RF gain). My Icom9000 is not the best receiver as far as sensitivity is concerned, but it is "good enaugh" on SSB (under 1 uV, on AM about 1 uV). I found that the reception on MW was rather equal, but the SDRs were at least as good as the Icom. There was no need for notch & PBT however. On SW I tried to listen to barely audible Peruvian on 4790.1 where I "think" the sdr-14 had best signal after Icom and sdr-iq. Alltogether the differences were marginal.

Speaking of Dymanics
You have to note however, that the low dynamic values of SDRs could be a problem at night and amplified antennas. It seems that the Noise Floor is really higher at night and I think it is because you get so muach RF from powerfull European station. Another interesting factor is, that the noise floor seems to be higher when listening to the RF-recording afterwords, - it should be ok when you are processiong the file afterword, but you have take into consideration when comparing the pictures taken from the real listening situation or afterwords.

The results
The conclusion is as earlier reported by several dxers: sdr-receivers are best at low-noise environment (for hard-core-dx) and low noise antennas. However looking at the IQ, you have to take into account the price of the rx (around 400 euros, maybe 1/4 of the "normal" analog rx) - the ability to see the Spectrum and measure the frequency to at least to a Hz. And, finally - to record a segment of the band for later analysis or using the machine to transfer the listening moment to a more suitable time and date!

Conditions at the Equinox-date
Overall conditions have been rather good this weak with a lot of NA, CA and South American signals noted. However, I have had no time to do serious DXing so far and it seems we are going into a at least minor storming towards the next Sunday. Hopefully something can be heard before that.
Some stations like PJD-2 Neth.Antilles 1300, R Viva Cali 1290.27 (split!) etc was heard on Equinox date. I think at least for Scandinavian hard-dx-hunters we are approaching the times of Andean DX later this season.
Hope to get something from Far East or Australia (Well, the X-band has been poor this Spring) before I have to go the the field to pick up my FE Bog - the snow is disappearing just now!

New Laptop tests going on
Finally got a new Laptop to check. It is also an ACER model (WLMI 6463) and it seems to have a PSU which does generate noise. But a new machine can be run with the battery for at least 2 hours, so it should do the work, but not unattended. Hope to get a second battery as well or a better battery. With it´s 2 GB of memory I hope to run simultaneously two or more sdrs also...

KSBN had a clear and loud signal at 14:05 UTC on November 9, 2006 during LEM234. It was also easily seen on the SDR-14/Spectravue spectrum since the station operated badly off from it's nominal frequency. The correct frequency was 1229.929 kHz so KSBN was totally 71 Hz under it's nominal 1230 kHz. Actually most of the stations in the US and Canada are more or less off from their offical frequencies.
KSBN "Moneytalk 1230" verified with a kind e-mail message and the v/s wrote that KSBN is the oldest radio station in Spokane signing on the air in 1921.
Posted by TuA at 21:29 No comments:

This real gem called itself "K-Gem" when I captured it during LEM234 on November 9, 2006 at 13:28 UTC. It also identified "11-40 K-G-E-M, K-Gem" and it was audible during several nice nostalgia songs. It was, however, badly interfered by CHRB High River, AB on 1140,013 kHz but luckily KGEM faded in over CHRB very strongly for a couple of times. And because of a local Morning Show, KGEM identified frequently during this listening period.
Very friendly QSL came in a couple of hours from Radio Engineering Manager who used to enjoy finding distant stations on the AM band years ago as well.
Posted by TuA at 19:59 No comments:

"Real Country - KNEU, AM 12-50" was heard November 7, 2006 10:24 UTC during LEM234. KNEU had nice country songs and the reception was fair for a couple of songs and announcements. A short e-mail verification came in 7 hours after a follow up report.
Posted by TuA at 19:48 No comments:

I found this HI -station last week when listening to my previously unchecked files from LEM234. KUAU played peaceful religious music and identified very clearly "This is 15-70 AM, KUAU Haiku.".
Finding an e-mail address to the station was a little bit difficult but finally I got a nice verification from an Assoc. Pastor/Music Director. He also promised to pass on my report and the audio to the Media Pastor who oversees the radio stations in this religious organization.
This one was HI # 24 for me.
Posted by TuA at 18:26 No comments:

I captured this nice-sounding MT -station during PAX69 back in January this year. The reception was fair for 15 minutes and the station identified "You are listening to Big Sky Radio. This is KHDN AM 1230 Hardin." Very polite and kind e-mail verification came in 7 hours after sending my follow up report and audio to the station.
Posted by TuA at 18:19 No comments:

This station used to operate on 1450 kHz but in September 2006 it switched to 1690 kHz and at the same time WRLL moved from 1690 kHz to 1450 kHz. WVON's President herself verified my reception and the audio with a short e-mail note yesterday. WVON carried a talk show called "The Soul Mate Connection" when I picked it up during LEM234. It used to announce with the slogan "WVON - The Talk of Chicago."
Posted by TuA at 19:36 No comments:

"Madison 16-70 AM, The Pulse" as this station called itself was heard on November 6, 2006 at 2.20 UTC during LEM234. I made a long recording with E1 on 1670 kHz hoping to catch just this one and I did succeed.
I got the nice e-mail verification from the station yesterday. Besides the verification the v/s also wrote: "Finland & Sweden are two places that I plan on visiting some time in my life. I'm a big fan of things from that part of Europe - I drive a Volvo as a matter of fact (my second one).
Posted by TuA at 19:25 No comments:

I spent two nights in JPR QTH in Muhos. Conditions was weak to fair. You will find loggings from Online log (Finland) and from link http://baanaweb.fi/mnbvc432/Muhos_02_2007.rtf 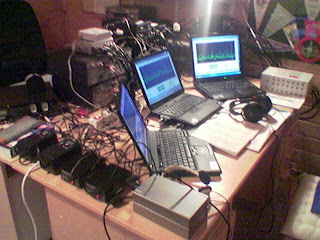 KMHI identified as "AM 12-40 KMHI" between country songs. The signal was pretty loud and clear for about an half hour on November 9, 2006 during LEM234. This was the first time I managed to pick up this one. Thanks for the v/s -info MTM!
Posted by TuA at 18:09 No comments: