You will find loggings from here (rtf 90kt)
Posted by PUDXK at 17:07 No comments: 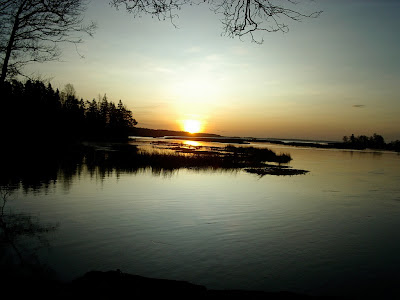 The photo above shows a sunrise South of King´s Village by the sea (the , Abborrfors) at 21 Dec 07.30 UTC, just about one day before the winter solstice.

Tomorrow Dec 22nd at about 6.08 Universal Time, the sun will reach its lowest declination of the year: minus 23.5 degrees. Astronomers call this the "winter solstice"--the first day of northern winter and the longest night of the year.

As this moment approaches I am glad to wish You All a Merry Christmas and a Happy New Year!

Finally after 8 weeks I am ready to present my own NA-log. We had two fine days 8th and 11th and three good ones, 10th, 12th and finally 13th of October. Every day something, 9th we had some East Coast.

It was interesting to track for example 660 KTNN Window Rock AZ from SDR-files on 8th of October. First hint was Midnight Trucking Network program at 07.00 UTC, part of the id, Window Rock mention at 06.00 UTC, finally navajo-music 0434 UTC and perfect id after nice country mx 0451 UTC. From records you are able to see where I parked SDR. Because of minimun time, lower freq were very interesting, also 1220-1410 khz is offering four GY-and many fine regional-freqs. I still have a couple of nice UNID´s, spanish yankee on 1290 and Radio America on 920 without names.

Finnish colleaques have checked all the +stations, ANA and JMS were helping me to solve 970 WKHM Jackson MI. TNX! We had not the perfect timing, two days before and four days later lasting expedition would give us the whole World. Now we got the half, Japanese loggins are following after some weeks and that list will be very long. LEM246 and 248 had good luck to Pacific, we had also something from there but they will remain in their shadow.

Telefunken was again the ultimate receiver, the same signal purity in SDR will be very much welcome. 730 KSBU was able to get easily by Telefunken, same for 940 WINZ, SDR was offering the same signal, but not readable. The best choice for ultimate results will be high quality DSP-receiver to parked on every GY and two-three SDR´s elsewhere.

Weak early night however many stations was audible at 2030-2130utc. WLQV at 2100utc. Stations in upper band in the night. In the morning different conditions than never before in this pedition. First stations from MB, MN, ND and some MEX, then 1.5 hours without electricity. After this sleeping break first time also stations from west coast. KZIZ-1560 seems be usual nowadays and KVAN-1560 is SS.

ENOX6 is now signing off. We are now in Kittilä and TK will jump into Helsinki night train in Rovaniemi. JPR and JVA will continue to Oulu. Monday is unfortunately again working day. 73's to all: JPR, JVA, TK

No recordings to check and empty log book! So we have checked old recordings. For example JPR picked up from Muhos recordings WVAM-1430.

Temperature +1 degrees, more snow during last two nights. Maybe that's why we have also huge electronical disturbances and it was almost impossible to try to listen in daylight time. However In FM two Norway stations audible, but no RDS. Waiting better cx for last day. JPR, JVA, TK

Weak conditions to NA continued. Weak signals and nothing special early in the night, some LA and NF in the night. We have no LA-antennas, but for example 1240 Radio Maria and some Columbian in lower band was audible almost whole night. So sleeping most of early morning hours.

Some stations takes time. JVA picked KDHL-920 (maybe this is also unid Radio America on this frequency) first time in ENOX2 - now several times - and now at last CKDY-1420 in ENOX6. It takes over 20 years to pick up these common stations.

TK tested a 8 cm long PA0RDT active stick antenna monted on a fishing rod of 6 m. Although KOMO was loud and clear on a West coast beverage there was only a small carrier on whip. So not a best antenna for NA stations.Good weather, not too much snow to go out and check antennas in forest.

We arrived to ENOX late yesterday evening. Some stations in night, less stations in the morning and only few in day. Weak conditions - however there was almost on every frequency stations - but usually the dominants. Some stations from log book: WAUK-1510, KGOW-1560, WLRT-1490, KQDJ-1400, KCCR-1240. JPR, JVA, TK
Posted by PUDXK at 19:08 No comments:

Difficult and unstable conditions continue. LA-CA with some NA at night, a bit better with NA in the morning, but almost dead in the afternoon until 14 UTC, then some west coast. Hard to belive that this should have been the best week of the month during solar minimum ! WNIK-1230, BER 1160&1450 with huge signals at night, KVNU-610, CKBX-840, KVOZ-890, KEJO-1240. LEM252 will go silent on saturday mornin at 07 UTC.

ENOX5 is signing off. Right now the lower band is full of SA and CA -stations with the usual QC-, NF- and NY -stations from Canada and the US. The upper band is much more weaker with only the common powerhouses audible. ENOX6 crew will come today late in the evening and they will stay until Sunday. I wish you 73's and a great stay here in Enontekiö! TuA

Quite lousy day with a few interesting stations in the morning. Only the most usual stations were audible in the afternoon. Today's highlight for me was WFDF Flint, MI offering strong signal and R. Disney programmming with a perfect "91 - WFDF" ID. Never heard the station before. WGR-550, WTVN-610, WMT-600 and WTNY-790 are also worth to mention.Hopefully the last night and Wednesday morning will offer more interesting stations. TuA

Arrived in Enontekiö about 12.00 UTC. Lots of snow and temperatue about -5 C. Stations from WY, N. and S. Dakota, MT, and Prairie faded in quite strongly in tne afternoon on the whole AM band. Mostly the dominants at least on the fqs I have checked from the files so far. However, some nice ones were heard as well; KGYN-1210, KGMI-790, and CBQI-920. TuA
Posted by PUDXK at 19:06 No comments:

This religious format Oregon station was captured on ENOX2 in October. It faded in briefly on the top of the hour with a clear station announcement. KGRV was badly mixed up with KXLX, KBYR and KALL but luckily the signal came thru. Nice to have this one in the collection.
A short but a very kind e-mail verification with Christmas Greetings came in two weeks.
Tnx fr v/s -info ABU.
Posted by TuA at 22:51 No comments: 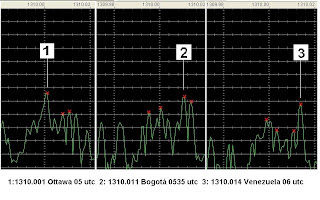 Not very much to report from my King´s Village QTH on Oct - Nov although quite a few good DX-days noted also here. Still using primary my BOG @40 degr (300 meters on the ground), my lw of TA-dxing seems to be still a bit noisy.

Most of new stations logged here are from the East. Noted a few Philippine stations like 1062 and 1548 Super Radio (seems to ID only DZ-double B), the last finally with IDs several times in Oct-Nov. Some japs was noted as well, several commons with great signal.

As many of us using SDRs know, these machines are good to measure rather easily frequencies of stations. I made a mini DXpedition to my Haapavesi QTH and recorded on one morning channels 1190 - 1380 on Nov. 4th.
As CX favoured North - Central and part of South America, I was able to get at least one station on ecah channel. One new TA-station for me was logged also: WIVV 1370, which seems to be on split 1369.983. This has been rather difficult to get earlier.
Also made some measurements. At the picture you can see one example how stations come and go: on 1310.00 first Ottawa (Oldies 13-10) at 05.00, later on mix with Bogota (Manantial) on 1310.011 (with good ids and px announcements at around 0535), and the normal dominant best later on: RNV 1310.014. Also there was tentatively Maria Panama near the nominal as well.
All these DX was made with a SDR-IQ, Acer laptop (using only own batteries to avoid noise from the transformer). The antenna was a beverage of 410 meters at 290 degrees (with coax lead of 350 mtrs). By the way, as the antennas has been in rain for about two months with transformers, I noted very much attenuation somewhere - and found that the transformer at the end of the long coax led (350 meters) was wet - and the results was extra attenuation of at least 20-30 dB! ALthough the transformer is housed in a small pastic box this has not been enaugh as the rain has been severe for several weeks! So extra housing should be used indeed.
73 TK
Posted by TK at 13:38 No comments: