This was the last night of LEM245. It's time to get back to work. Conditions were mediocre this morning. It was the weakest morning of this expedition, but still there were quite a few stations from La Plata and Brazil around 04 utc. One of the highlights from the previous night was HIKA Radio Impacto, Santo Domingo on 1440 kHz, which even dominated periodically the semilocal powerhouses in St. Peterburg and Luxembourg

Last evening a short but sharp opening to Korea. Stations like HLKH 747, HLKA 756 and HLKH 792 with local identifications. The night was filled with basic NA, CA and SA, one should have stayed in bed instead. Again the morning was excellent. Perhaps the strongest SA signals I have ever experienced. The best peak was at 04 UTC with Paraguay, Chile, Venezuela, Ecuador, Peru and Puerto Rico. Many stations on every frequency between 550 and 1600 kHz.

The disturbance (coronal hole) arrived yesterday. Evening's Asia changed completely. Only stations from Western China and India, but nothing new worth mentioning. The night was boring with weak NA and SA. Sunrise was nice and strong again, but only for some 30 minutes between 0330 and 0400 UTC. R. Colonia 550 was like a local station. Many stations on the lower AM-band from Northern Argentina and Paraguay, too.

Mr. Alvestad is right, conditions are really excellent. Two weeks without sunspots and it clearly can be heard on the AM-band. Last evening about 80 most common Chinese mediumwave stations for the fifth evening in a row. I know them by heart now. At 01 UTC stations from La Plata, especially Uruguay was strong. At 02 UTC stations from Mexico, all the common DF-stations but also something more interesting like XEJPV 1560. Then at 03 UTC mostly North Americans and at 04 UTC Venezuela became unusually strong. What a wonderful present for the 40th birthday.

Pilipinos strong at midnight, stations mainly from Manila and Iloilo. TA-signals weak at night, but quite good sunrise again with strong La Plata and Brazil between 03-04 UTC. Not much luck with station identifications though. Now at 15.00 UTC Asians starting to boom in again. Unfortunately 'paimenpoika'-interference is back.

Very strong morning opening between 02-04 UTC, but too wide conditions. Stations from 550 Colonia to 1630 Texas. 630 was like a graveyard with RNV, WUNO and Rivadavia pushing Norway away. Feels like a solar minimum. The new 319 antenna works extremely well! Also, no trace of IBOC interference at all. Now at 1430 UTC Japanese and Chinese stations start to fade in.

Asia conditions on Saturday and Sunday around 17-18 UTC with mostly Chinese stations. No Aussies yet, except few weak x-banders. The night was mediocre with South American stations like R Mar del Plata 670, R Nihuil 680 etc. Also some North Americans, but only the common dominants. Summary: quite good so far, but not yet spectacular. AM-band is finally free from man made interference, the awful 'paimenpoika' is gone. Hopefully it will remain so.

The nighttime IBOC began in the US

As we all know many AM -stations in the US switched into the IBOC overnight operation on "Black Friday" September 14, 2007. Since then many local AM listeners in the US have found AM band to be noisier and DXers over there have noticed the digital "hiss" sound especially around the powerfull stations all around the AM band and all around the Nation. The IBOC signal covers 15 kHz to the both sides of the station's nominal frequency. I do hope that the situation here in Scandinavia does not change as dramatically as a DXer in Kingsport, TN wrote:
"I gave a listen to AM early this morning for the first time since IBOC came on. It was about 1am local time.... . .boy was I disappointed... . .*sniff* . .I felt a sinking feeling in my stomach. I COULD NOT BELIEVE all the hiss. I listened for a few min's and went to bed. I hope..HOPE that maybe my neighbor had something on like a light w/dimmer switch. I'm glad I have BUNCHES of cassette tapes of AM radio the way it used to sound so I can "re-live the good-ol days".
The next weeks will tell us what are the US IBOC nighttime effects on NA-DXing here in the Scandinavia. Hopefully not too bad...
Posted by TuA at 20:05 1 comment:

The PUDXK crew is testing a new DX-pedition site for Trans Atlantic (mainly NA) -MW -listening in Finnish Lapland. The site is located near the centre of Enontekiö. In many ways the site seems to be pretty good for DXing but there are certain problems concerning antennas in some essential directions especially to South America, Oceania and Asia. The terrain around the QTH is not 100% ideal (no high trees and many reindeers) to build long beverage antennas and this makes things little complicated. We tested the site with two antennas directed to the US east coast and Midwest for the first time in the end of August and we noticed the local noise level to be pretty low. However, as usual the wintertime will tell more about the noise level around the QTH in general.

The PUDXK crew will continue testing this location to find out if this site could be a usable NA-listening QTH. If so we are going to use this site mainly for short term (2-4 days) listening sessions around the predicted peak NA -conditions monthly.

Here are the first loggings of this site (ENOX1) – LA stations with NA-antennas!!
Posted by PUDXK at 15:48 No comments:

The tradional Camp of PUDXK was held at Haapavesi on August 31... Sept. 2nd. This was the n:o 4 meeting and every year in August we have had terrible bad reception conditions during our meeting. So more time has been devoted to good meals etc. This year was not that bad, although the solar wind schock arrived a bit earlier than expected and there was too short time for conditions to reapper. Some Latins and Caribbeans were noted at first night but nothing very interesting (unless someone discover more stations from the sdr- or MD-recordings). We were 4 dxers (JSN, MKA, MR & TK).

This year we had some new tests:
- K9AY erected a bit more far away from the house - using special "tools" like some parts from a washing machine at the glassfiber mast & tradional wood poles (hay poles) at the corners (for drying hay sometimes in 1950´s) 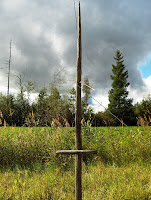 - An unattended sdr-qth in the middle of forests (3 km to the electricity) using a SDR-IQ + 300 meters wire - it was a bit too southwards in order to get very much La Plata and later Orinoco signals although the beginning was promising when we started the meachine at 22.34 UTC. However the HP laptop survived about 4 1/2 hours capturing signals using the so called "travel battery" of the computer... when you use this kind of system it is best to remember to have all the softaware with you as now we had to drive again to the forests (50 kilometres more driving at night) to bring the Spectravue software ... 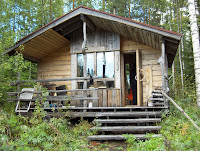 About the delicious wines and meals more at the DX-Culinarism Blog.


Back at my King´s Village QTH this week I tested briefly my East BOG of about 300 mtrs at 40 degr. (can not lay it down for longer period yet until my neighbour has finished all the agri jobs before winter!). Indeed a low noise and beautifull signals from Asia ...
Posted by TK at 16:51 No comments: