As I wrote earlier March 6th offered some nice catches on ENOX26. I have checked some of the files on this morning with decent results and it will be interesting to see if there will be more new ones for me on the March 6th -files.
KTOP Topeka, KS on 1490 kHz faded in this very morning with a TOH ID and later with the ESPN programming. The signal was clear and I recorded a short mp3 audio and emailed it along the reception report to the station. It took only a few hours to receive a verification and a couple of other emails from KTOP. This was my second new KS -station this morning and KTOP became my KS #15.

KFH Wichita, KS 1240 surprised with a huge signal on ENOX26

March 6, 2011, the last morning of ENOX26, turned out to be a quite good morning for NA Dxing after all. A few nice catches have been found especially on the GYs. Among those goodies was KFH from Wichita, Kansas on 1240 kHz. In this same morning and within a very short time I identified KCCR, KBIZ and KFH - all on 1240 kHz. KFH - formerly KNSS was heard every now and then back in the 80's and 90's but nowadays KFH has been quite a rare catch.
KFH had a huge signal this morning and the station manager was amazed about that. He verified my report and the mp3 audio in a few hours.
Posted by TuA at 20:21 No comments: 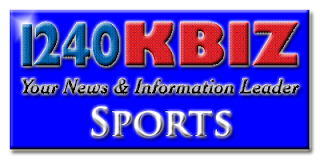 My last morning on ENOX26 (March 6, 2011) offered some nice stations as well. On 1240 kHz was a good frequency with a few K -stations audible. One of those stations was KBIZ Ottumwa IA which faded in just on the top of the hour with a complete identification. What surprised me a bit was the fact that there wasn't any network news on the the hour but instead of that the station carried Fox Sports Radio programming right after the announcement.
KBIZ has been heard quite frequently in Scandinavia. However, this was the first time for me to pick up KBIZ. KBIZ verified kindly with a couple of emails in 2 days.
Posted by TuA at 18:48 No comments:

KGEZ Kalispell MT 600 kHz - back to its old glory? 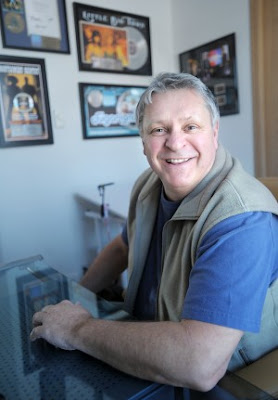 John Hendricks at his home in Kalispell.

WCLE became my TN #6 and my 3rd new TN in this season. Firstly I heard WDIA 1070 then WENK 1240 and now WCLE 1570 that came in loud and clear for about an ½ hour on ENOX24. WCLE seems to be way off its nominal 1570 kHz. When I captured the station the exact fq was 1570.0218 khz and its peak was clearly seen on SpectraVue's display.
It took a couple of attempts before WCLE verified. Finally I received a kind and complete verification in an email message.
Posted by TuA at 19:39 No comments: 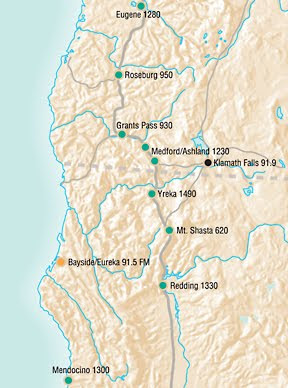 KAGI is a part of Jefferson Public Radio News and Information Service in Southern Oregon and Northern California. This station is very seldom heard in Scandinavia. However, it has been picked up at least once before in Finland.
This time KAGI's signal was clear but not very loud. An Alaskan KTKN mixed up with KAGI and also KSEI Pocatello, ID faded in a bit later on the frequency with ESPN programming.

KAGI's Executive Director verified my report first with a prompt email message and later with a decent QSL -card. He also send me a copy of fine "Jefferson Monthly" magazine. 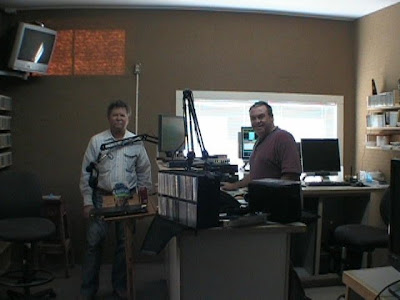 "K-Hog" as KHWG likes to call itself came in very clear and loud on ENOX26 in February. KFQD and KXL tried to take over the frequency but after all K-Hog dominated on 750 kHz clearly on the top of the hour. This was the first time I picked up the station although it has been heard in Scandinavia earlier a couple of times.
DJ Frank Atkinson verified my report and he attached also a couple of photos on the station and Nevada. In the picture you can see Frank on the left in the KHWG studio in Fallon.
Thanks for the nice answer Frank!

KTDD "The Toad" bounced to Enontekiö

KTDD San Bernardino on 1350 kHz was heard nicely on ENOX26 in the end of February. The station played fine country songs like "Mama, Don't Let Your Boys Grow Up To Be Cowboys" and gave a TOH ID: "Genuine Country music, KTDD Riverside - San Bernardino - 1350 The Toad". At the time 1350 kHz was very crowded other NAs as well. At least KTDD, KTIK, KRLC and KSRO identified within 10 minutes.
KTDD's V.P. verified with email in two days.
Posted by TuA at 19:19 No comments:

This pedition wasn't intended to make SDR/DX history the way it did. The target was to encounter at least moderate CX towards NA –potentially also some daytimers, due to the favourable change of broadcast times on March 1- with some MW aussies as a bonus.

But it doesn't always go as in the movies and this pedition writes history by being the first(?) DX-pedition where all the files have been checked and destroyed during the pedition and the log ready for publishing on the last day of the pedition.

On the background you'll find some cold facts: There was some CX only in the first three days and only a couple of hours per day. So in the last days of the pedition there was 15-18 hours to check those first three days…

Still some CX was found

Durin the couple short TA cx towards NA, it was wide open from Florida to Hawaii. Strongest signals came from the Rockies and West Coast, called as ”Ylämummo”. Even if East Coast seemed to be weak at live listening, the best parts were found from there from the first morning of the pedition.

Some local noise issues and one break in the automated recording at prime time in the first morning added to the challenge of digging up something worthwhile.

It has been long time ago, when we had a nearly total break towards NA for 5 days, but LEM304 saw and heard also this come true in this season.

But anyway some nice stations were heard and also X-band aussies tried to come through. Below 1611 kHz only 4QD Emerald was audible.

The new netSDR worked out fine and seems to be an excellent receiver. Perseus is close to the netSDR, but real critical benchmarking couldn't be done due to the lack of good material ...

Tuomo Ahonen arrived two days later on ENOX and we made some comparisons on February 28, when Rockies-West Coast had some nice signals. The distance is just some 80 km, but the differences with some individual stations heard were remarkable: On LEM no trace of KAGI-930 or KACH-1340 (which station came in booming on ENOX). Instead KSEI-930 and KYLT-1340. On the same hour no trace on ENOX of KGRZ-1450.

This just enforces some earlier experiences of the remarkable differences even on very short distances during disturbed conditions.

ENOX26 was not success at all. Very active and bad solar weather kept NAs away for the most of the time. However, some nice catches came thru after all. Please, find here the first draft of ENOX26 loggings.
Posted by JVA at 18:26 No comments: 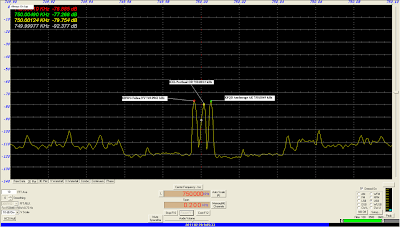 Poor conditions lately on Tuesday, Wednesday and Thursday because of the very active solar weather. So I have had plenty of time to go thru the files from Monday recordings. Nothing special results but however, I managed to pick up KGEZ Kalispell, MT on 600 kHz. This one has been inactive since September/October 2009. Recently the new owner has begun broadcasting again and it was heard instantly on ENOX with great standards and frequent announcements.

Here is a 750 kHz screenshot taken on Monday, Feb. 28, 2011 on ENOX26. It is very interesting to chase stations with NetSDR and SpectraVue software since the display shows all the time signals on different offsets with 0.73 Hz resolution. The four strongest signals can be marked with the different colors by the user.
TuA

I arrived in ENOX DX-location last Sunday. I set up equipment and tested antennas. Everything was OK - all antennas and a brand new NetSDR worked fine.
Monday morning offered some nice catches mainly from the west. Tuesday night and Tuesday morning were poor. Hopefully conditions get better as the week continued even if the predictions are not very promising.
Best catches so far are KTDD-1350, KHWG-750 and KAGI-930
Weather; clear and sunny. Yesterday's high -1C. This morning we had -10C .
TuA
Posted by TuA at 08:57 No comments: