At the time KTRB was "Xtra Sports Radio" I never succeeded in hearing it. KTRB switched to ESPN Deportes in July, 2011 and on one afternoon on ENOX28 in October it came thru along with some other CA -stations. It was audible for about an half an hour. Although CHAK dominated the frequency KTRB faded in and out with a decent signal at times.
Posted by TuA at 11:22 No comments:

WPRS from Paris, Illinois is not the most usual guest on 1440 kHz. On ENOX28 I heard country songs every now and then on 1440 kHz mixed up with Big Jab, WHKZ and sometimes also with "W 14-40". Finally the other day the signal faded in loud and clear with a Waylon Jennings song followed by a complete ID.
WPRS verified nicely with a real old fashioned hand written QSL -card. This was my lucky day - two old fashioned REAL QSL cards arrived in the very same day!
Posted by TuA at 21:05 No comments:

KKXA began broadcasting on Tuesday, October 11, 2011. It was heard on ENOX28 already on Friday, October 14, 2011. However, before that KKXA was picked up by three other DXers around the world since my QSL says that my report was the 4th one they have received. So maybe ENOX28 was the first "crew" to pick up KKXA in Scandinavia?

Nevertheless KKXA came in loud and clear on ENOX28 almost daily. During my first reception KKXA ran a test transmission playing artists like Ronnie Milsap, Dolly Parton, Kenny Rogers ect. It was nice to get an old fashioned real QSL card for a change. 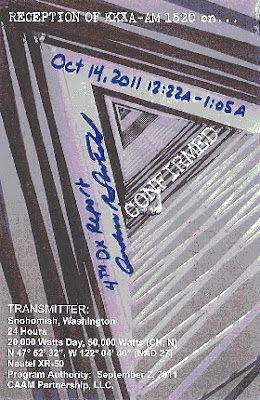 1550 kHz became an interesting frequency after CBE signed off in the end of September. There are many dominants on west coast cxs but during openings to the US east coast and Midwest this frequency could be a gold mine in the future. A cuban station is of course a powerhouse but for instance on ENOX28 there was a bunch of stations fading in and out on 1550 kHz in the morning hours.
One of those stations was KLFJ from Springfield/Branson, MO. It was audible several times and on many occasions with a very stable and loud signal. KLFJ became my second verified MO -station on 1550 kHz since it was way back in 1988 when I managed to hear KKJO (nw KESJ) St. Joseph on the same frequency. KLFJ verified in 4 hours.
TuA
Posted by TuA at 08:52 1 comment: