Yesterday evening I was checking some of my PAX63 (October, 2006) recordings that I haven't gone thru before. I was lucky to find a clear WKWF identification on 1600 kHz on October 10, 2006 at 06.19 UTC in the morning during the station's sports coverage. Station announced "Home of the Conchs - WKWF Sports Radio 1600." I got a very friendly QSL today:

"Thank you so much for your email. Yes, you did indeed receive WKWF, Sportsradio 1600am in Finland. Amazing. I think that this may be the most distant communication requesting verification that I've ever received. WKWF is named for Wonderful Key West Florida and is owned by Spottswoods LLC for which Clear Channel manages and operates. As a manager for Clear Channel Radio, I'm proud of our little AM station who's signal makes it all the way to Finland. WKWF is the oldest operating station in the Florida Keys and is on the air 24 hours per day, 7 days a week. On a side note, we expect the temperatures to reach into the 80's today. What is your weather report?
I hope that you have a GREAT day!! and again, thank you for your email." 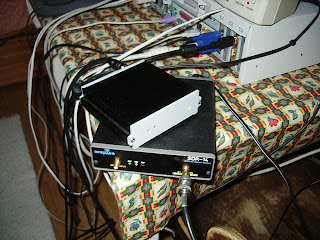 I have finally tested the new srd-IQ for a while. It is nice, quite small, but as all knows the first batch was only the board and you have to put the casing by yourself. Thanks to OH5HOI (IJL) I managed to get the good casing to the board. Ilpo did also the small modification to the board. As you can see at the picture the unit is rather small. More pictures can be found on Ilpo´s site (look for OH5HOI). The good thing is also that you get the power via USB, so no need to have a PSU here. Sometimes (as the one which comes with sdr-14) these units can cause some noise on MF-HF bands.

* Overall reception seems to be equal what comes to sensitivity and dynamic values of the both receivers , however, it seems that the new software has RF-gain +10 dB – adjustable to minimum -20 dB (IF gain the same as earlier +0…+24 dB) and during some comparisions it could be seen (the incoming signal level was higher with sdr-iq). That made no difference to the S/N-values though. It seems that dynamic (widespaced) is even better than that of the more expensive WinR 313e – I tested that at my RF-noisy urban (home) QTH with Helsinki AM 558 kHz making spurs to my WinR 313e with an amplified loop (ALA100 3x7 meters) – no spurs was noted on sdr IQ! Usually when I used a BOG (very low antenna gain) I could have the IQ with RF +10dB and only in the evening I had to put it at +0 dB.
* Some stability problems did occur at both configuration: the recoding did not start or recording stopped after some time (1 second … 10 minutes) – this was at my systems, however some other users have not had these problems
* Some problems occurred also using the both rx´s at the same time (picture showing simultaneous capture of two 190 kHz segments). This might be a problem with the old computer as the load of the computer was rather high (up to 80…100%) or the memory problem although there was 1 Gb memory and I have heard users using the old sdr-14´s (two of them + WinR running simultaneously – as reported by TuA earlier). At the picture you see also the simultaneous capture situation – SDR 14 did everything OK but IQ stopped often and had to be started manually, so I have to check this configuration more later on – BTW I made two copies of the softaware to two HDs and capture was done also to these separated (though inside the pc) HDs
* If you want to look at a wider spectrum (like max. 30 MHz with the 14), that is not possible with the IQ: you have to stick with the 190 kHz maximum spectrum – this is not very common use if you dx on MF bands, however.
* Sometimes you might have problems with the power using older computers – this seems to be a problem with usb 1.1. – but as stated at the specifications of the rx, you should have USB 2.0 with this rx.
* You have to get used to the “harsh” audio of this (as that of most of these sdr-rxs) and should there be more adjustments to the audio, could it be even better on that respect
* no PBT nor notch are included in the software at least for the time being (with CIAO software and WinR3xx you have the notch for example)
* you can read the exact frequency at least to the last Herz, but you have to be very careful with this as you have to calibrate the machine often using a very stable and precise station or frequency reference – at least the Finnish SDR-dxers have been using British syncro channels like 1215 or DLF 1269 (NRK 1314 used to be very good earlier…)
* at last I tried the DRM reception with the IQ and there was no problem decoding the DRM-signals. You have to use USB 10 kHz wide bandwidth with demod offset of 7000 Hz when you get the IF of about 12 kHz that you can demodulate by the Dream software. For output you have to use a virtual sound card or different cards for demodulating and audio. So this seems to be rather good also for the DRM, although price is a bit more than that of DRB30, but you can also analyse and decode several DRM-frequencies later on (for example capture DRMs on 49 mb from 5990 to 6175 – when there is at least 4-5 DRM stations at the same time). I tried the AIR 7410 test to Europe, the audio was 99% ok with S/N 22…26 dB, but they used a bit overmodulated signal and a modest bit rate (mono, about 13 kbs) 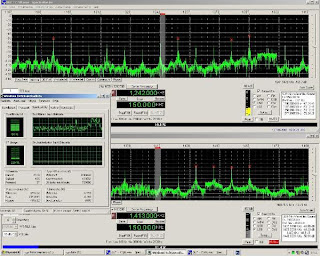 Although I had some (possible computer related) problems, there has been no problems of this kind on other new IQ-owners I have been told.
However I would say this is a great machine. I do not know any this kind of receiver at this prize class: only about 400 euros you can get a spectrum analyser, rather good receiver and finally a time machine which you can program to “listen” and capture the 190 kHz segment of radio spectrum for later analysis. I have been using an old ICOM 9000 for years – yes, there is a spectrum (10…50 kHz wide cathode-ray tube!) – the prize of that machine was around 10 Kiloeuros when it was new … Of course you get PBTs, notches etc with “real receivers”, but…

I know some people think this is not for “real DX”, but there has been other breakthroughs in DXing which I have seen like a calibrator, digital frequency counter, big beverage antennas, better recording systems (reels, cassettes, MDs, pc-recorder, mp3 …). One thing with this kind of rx´s is the vision: you can see what you hear. And of course the ablility to tell the exact frequency at the same time without any special softwares. There is no way back to 1960´s or 1970´s with tube receivers and reel-to-reel recorders. Or you can do it also, if you can find those old systems - the choice is yours!

I Have Seen The Light! 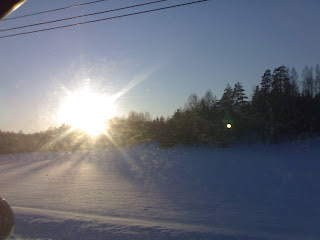 Yes. The spring is coming and the days are becoming longer, so the reception conditions are favouring South America and hoping to get something from the Andes later on.

Recent dx on February consists of mostly good conditions towards Northern parts of South America at the sunrise time. Typically good reception for an half an hour only. Most stations logged between 1200…1600 kHz at 0530 + - 30 minutes. Some days also pretty good openings towards Far East incl. some Chinese, Japanese, Korean, Thai and Philippino stations. It´s a pity that I have not been able to hear a single Aussi X-band station this season.

Some of the most interesting Latin channels have been (in the last few weeks of February, more at Hard-Core-DX log):

CKWW has not been an easy catch for me! Actually I have tried to capture this station for the last 30 years during many peditions and in my home location as well. Finally I succeeded in hearing this during PAX69 on January 27, 2007 at 7.07 UTC for the first time in my DX career. CKWW played fine oldies tunes like England Dan & John Ford Coley "I'd really Love to See You Tonight". This song almost hit number one in AT40 back in 1976. This time CKWW had a pretty good signal and it used a slogan "AM 5-80, The Motor City's Favorites". Nice e-mail QSL came in two days.
Posted by TuA at 21:27 No comments:

I have checked some of my PAX69 -recordings and you can read the first version of the log clicking the PAX69 -link in this blog. Actually I don't think that there will be many more interesting loggings from me since the conditions were not very good except the opening on Sunday morning at the time when I was about to leave for home. This log includes only TuA's loggings during PAX69. Stefan Wikander's and Italian listeners loggings can be found later on PAX -website. Log link
TuA
Posted by TuA at 20:10 2 comments: