Another rare catch from Minnesota on ENOX19 was WELY Ely on 1450 kHz. It's not the most usual station to be heard here but however, it has been picked up a couple of times before in Scandinavia. WELY verified kindly in a few hours. The v/s wrote:
"Thank you for your email. The recording you sent was indeed our AM station. It was a station ID “News, talk, sports; AM 1450 WELY.”
We do have a large Finnish population in the region. We had Finnish language show in the past called Aamuhetki that we hope to revive again. Our news director and morning show host was born near Helsinki and recently spent a year studying music in Kaustinen. It seems quite fitting that our station was heard in your region."
TuA
Posted by TuA at 21:08 No comments:

KNUJ on 860 became so far one of the highlights of ENOX19 some weeks ago. This one faded strongly in one late afternoon and the signal was audible for about a half an hour. CBKF2 from Saskatoon mixed up at times with KNUJ but remarkably the usual dominants in the afternoon CHAK and CFPR were not audible at all on 860 kHz at the time.
KNUJ news director was very surpised since he could hear himself reading an ad and giving the station's phone number on my mp3 -audio. KNUJ verified with a kind email in a couple of hours.
Posted by TuA at 21:26 No comments:

KDDR Oakes, ND 1220 kHz and KDAK Carrington, ND 1600 kHz both were captured on the same day during ENOX19. They both verified also on the same day - but in two different emails!
Actually KDDR was picked up several times on ENOX19. KDAK only once but luckily on the top of the hour with a legal ID. After these two QSLs I'm still missing KOVC 1490 - a third station in the Dakota Country network. Hopefully I'll come across KOVC one of my unopened files from this great MN/ND opening on ENOX19.

KYES on 1180 AM got very excited about the first reception reports they received this fall. However, after a while they got tired of many, many reports and emails they got from overseas including Scandinavia and they stopped answering them. I myself picked up KYES on October 5 this year but I didn't succeeded in receiving QSL direct from the station.
Today Relevant Radio headquarters kindly sent me an email including the complete verification of my KYES 1180 reception. KYES became my MN #51.
Tnx ABU for sharing the v/s -information!
TuA
Posted by TuA at 18:06 No comments:

During ENOX19 on the quite strong MN/SD/ND -opening I checked also 1520 kHz. I noticed ESPN programming going on and I thought it's KOLM Rochester with its ESPN coverage. The signal faded in and out but just on the top of the hour the signal got stronger and stronger and I picked up KMSR Mayville legal ID. It was a pleasant surprise indeed! Actually I heard this one already back in 2005 as KMAV but since I did not hear a complete ID back then I could not get the QSL either.
This time the station manager quicky verified my report with a short email.
TuA
Posted by TuA at 11:32 No comments:

KORN faded in on the top of the hour with its legal ID and ABC News coverage. KORN used its slogan "Talk of The Town" just before the legal ID. Signal was quite loud and clear for some minutes but gradually KORN faded out totally.
A very kind verification came in a couple of hours and KORN became my SD #25.

KKIN faded in this time on its daytime power of 2500 watts with a clear legal ID on the top of the hour. Some moments earlier 930 kHz were occupied by CJCA and KSDN. This one has not been heard in Finland before. KKIN verified with a very kind email within two days. Later on the v/s attached a station logo as well.

Heard this one late in the afternoon on ENOX19. They had a nice jingle "AM 1220, KHTS" and they also mentioned their slogan "A Hometown Station". This was my CA #57 and this season's second new station for me on 1220 kHz along with KDDR.
KHTS verified my report and mp3 with a kind email in 6 hours today.
TuA
Posted by TuA at 21:43 No comments:

The Sun is Standing ! 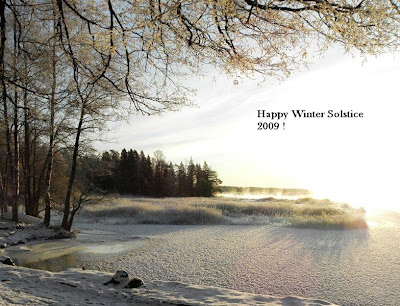 KING ´S VILLAGE DX WISH YOU A HAPPY WINTER SOLSTICE 2009 - THE SUN STANDS AT DEC 21 1747 UT AND WE ARE BEGINING OUR WAY TOWARDS SUMMER!

In the meantime when we also are in the middle of snow and ice in Europe we can enjoy the best medium wave conditions towards the Northern Dimensions!

The photo shows the scene at Abborsfors 10 kms South of the Kungsboele QTH, three days before the solstice, the weather was still fine with sun and - 19 centigrades (18 Dec 10 UTC).

There was often a bunch of stations on 610 kHz during ENOX19 especially in the morning and in the afternoon. However, so far I have found only one station that I haven't heard before on 610 kHz. It was KCSP from Kansas City that faded in strongly on the top of the hour in one morning. KCSP identified as "610 Sportradio, KCSP Kansas City". PD verified my report in 12 hours with an email.
Posted by TuA at 18:24 No comments:

ENOX19 offered new ones from SC and NM today

After two long working days I arrived in Enontekiö late Thursday evening and went straight to bed. I let the SDRs do the listening and saving in the night.
Conditions this morning and afternoon were good with many fine stations on the band. The most interesting catches include KANA-580, KSUB-590, KCSP-610, KHTS-1220, WLMA-1350 and KHOB-1390. WLMA and KHOB both with fine, strong TOH IDs.

I heard WKWF a few years ago in Långåminne - the legendary DX-site some 20 km south of Vaasa. At that time I didn't get a verification. During LEM279, the 14th of Oct. I picked them up again and this time I was lucky enough to get a nice verification e-mail and coverage map from Nancy D'Amato (Sr. Marketing Exec.). Thank you Nancy for your nice e-letter!

Some time tomorrow I will post an updated LEM279 log. Yesterday's best finding from the recordings: KKAT Salt Lake City UT 860. They've changed their format from OLD to TLK. They now use slogan "Utah's Big Talker".

Arrived in Enontekiö late Monday night. A few stations faded in and out around 2100 UTC but nothing special. Later in the night and morning stations mainly from east coast with steady signals. After 1000 UTC especially Minnesota and Dakotas offered interesting stations. KDAK-1600, KDDR-1220, KORN-1490 and WCMP-1350 were the new ones in my logbook.
It is cloudy and -1C outside. I'm going to stay a few days so stay tuned.
Posted by TuA at 20:20 No comments:

However, in the morning at around 07 UTC the signal levels rose and remained slightly better than on any of the preceeding 5 days. Still without any specific direction and just the usual dominant stations. Far from interesting but, in any case, living proof of the fact that the signals had not gone to sleep forever.

In the afternoon it was time to start packing - the end of ENOX18, the expedition with one of the strangest contrasts between geomagnetic indices and signal levels ever experienced.

News from the King´s Village

While waiting for the the real scientific answer of the current depression in North Dimension DX-conditions (mid-winter anomaly, higher (or lower) than usual Electronic density, too stable sun, new Iron curtain over the Scandinavia etc) , I´d like to remind of some new material at the King´s Village DX blog. Some items has been added after response from the DX-stations of the October and November. No news of the BOGbiters now, the beginning of the BOG has been partly under the water and no fish found (yet!).
Soon, it´s time to celebrate the St Nico´s day (the day of the inventor of Perseus receiver and another good guy a few centuries ago). And what´s more we will celebrate the independence of Finland on the very same day! How can we manage to do that remains to be seen.
73 TK
Posted by TK at 09:02 No comments:

Not an awful lot to add to yesterday´s report - except that the conditions have been even worse than yesterday.

The evening started with a promise of an early opening, but the interesting signals practically died out before the party really had started. Early in the night some weak signals, most interesting on some graveyard frequencies. However, after several hours spent on chasing the signals from the recordings only brought a couple of weak identifications.

Morning and daytime were some kind of records for themselves: as if some disturbance had blocked the signals almost completely andeven the weak ones were gone after midday...

How bad can this get... new tricks are needed after the nails are already beaten and howling at the full moon has not produced any results !

It is a known fact that good index values do not necessarily bring good conditions, but today was somewhat a record in that respect.

The evening was quiet and the band started opening a bit late, at around 2230 UTC, directly to the Great Lakes region. However, after about one hour the signals died out completely and did not return in any quality. Stations were weak and the band felt like during periods of solar maximum, with "dizzy" signals.

In the hours before noon it was a bit here and there, if recording even the TOH:s would be worthwhile, not even to mention recording at other times. The few weak signals came from Brazil to the west coast with no predictability. In the afternoon it was time to have a look at antennas, as there were practically no signals, except for most common Alaska in the lower end of the band.

Hopes are still high for improvement - it should not be too difficult from this level...

WXBR surfaced all alone on 1460 kHz on one morning on ENOX17. According to the statistics it has been heard only once before in Finland. So it was a very pleasant surprise indeed. WXBR faded in just on the top of the hour with legal ID announcing call letters, frequency and location. A kind email verification arrived in 24 hours.

Significant improvement from yesterday, but still unstable and without direction. Some of the most usual east coast stations (e.g. WKOX-1200), together with NL-stations around 2130 UTC, but no positive development as the night went on.

Slow start in the morning with just a handful of stations at 0600 UTC. Improving before 0700 UTC with emphasis on east coast; however west coast mixing, so that there was no specific direction.

At times quite clear and strong signals from common stations, but unstable. Still, if improvement continues, the following days will hopefully be interesting.