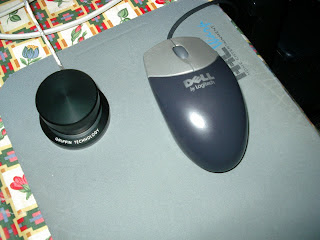 Finally tested the new knob for SDR-14. Indeed, most of us dxers like to use a knob instead of a mouse controlling our radios. So I tried also to use the Griffin PoweMate knob for changing frequencies on my sdr-14 receiver.
The knob is ok for that job, however I found that when you are used to the mouse and especially the scroll wheel of the mouse you do not get that much benefit using the powermate knob actually. The knob "sits" comfortable on the table on on the mouse pad. Anyway the installation of the drivers are rather easy, but it is best to have the latest version of the software from the net. I have heard some problems using the older version of the driver. You have to play with the software a little bit and teach the function commands to the knob first, after that the change of the requencies is easy. For the time being I have to change the place of the digit using the keyboard commands (like 10´s , 100´s etc). And I have to choose the step from the SpectraVue program as well when I change from European channels (9´s) to TA-channels (10´s). Otherwise the knob works OK - the next thing is to use it with the WinR 313e as well.

I have heard many comments of the DX-conditions in Northern Europe lately. Indeed as far as my DX-QTHs observaytions is concerned, the December CX has been the poorest for years! Not only the recurrent coronal holes but the very angly sunspot (930) made the propagation very bad until the very end of the month (29-31 Dec.). The solar wind speed which was averagely at about 400 km/s (average of months in Aug...Nov - quite typical for declining cycle) has been on an average above 500 km/s (average of December) - a very high figure!

Now in the beginning of January, like on Jan 3 & 4 - although the K-index has been around 2-4, the conditions have been even better than in the end of December (K 0-2) with some stations of North America & Latin America (mainly Col/Venez. + C.Americans - a few of them with moderate to good signals. Also lately the tropical band conditions have been better with some Papuans (3335, 3905) and Indonesian stations both in the afternoon and in the evening and a few Brazilian stations at dawn & even ARDS 5049.92 again coming in with "nice signals" (ok, S7 at best) even late in the evening (after 20ut).
Posted by TK at 12:14

Interesting comments about the Griffin Powermate knob! I find my Powermate knob very useful for DXing with a SDR radio, particularly the "push-click" function that I have assigned to changed in tune rate (step) sizes.

I never did like the Powermate much with it sitting flat on a desktop, so I have mounted it vertically. Please see this blog entry for photos and descriptions: http://sdr-1000.blogspot.com/2006_07_02_archive.html