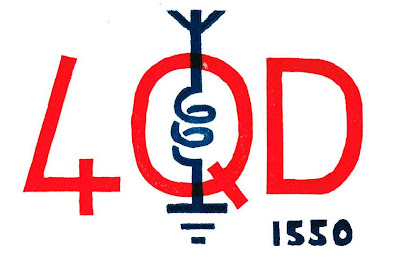 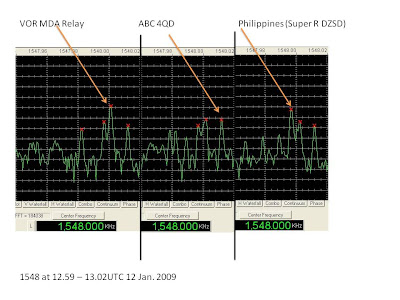 The selection of the DX-station of January was quite easy to do. I happened to be able to listen during a very interesting propagation to East / Far East on January 12th before sunset at around 12.45 - 13.30 UTC. Although we had possibly the best conditions "over the Pole" about a week later with some stations from Hawaii etc (around 23-25 January) I decided to announce the most interesting catch of the month to: ABC Emerald 4QD 1548 kHz. I know it is quite common in the Scandinavian Arctic to capture, but not so in Southern Finland at least with modest antennas. Actually I had the station verified also from my active DXing period in the 1970´s, but I have tried to get the signal all the time when DXing in my rural King´s Village QTH since about 1995. Finally on Jan. 12th the path to the Philippines (with stations like 1494, 1512, 1530 and 1548 audible) and to Australia was open and 4QD was coming although the powerfull RUS relay in Moldova had already signed on at 13.00. Also the UK station was very weak at that time. At the picture you can see snapshots of Spectrum View at different times showing the dominants around 13.00 utc. The ABC is also "easy" to see being usually at about 1548.012. Another picture is an old QSL from 1976 - I do not know if they still have that one.
Below is a short video (SpectraVue demodulating the signal) at around 13utc with ABC and at the end the PHL station with ID of the 594 DZBB (at 1303utc).

Would be nice with an audio sample!